Maximize Your Warehouse With Voice And Data

HAL Systems’ Warehouse Management System, allows you to maximize the use of wireless terminals, scanners and bar-codes to identify, track, locate, and control inventory quickly and accurately throughout your warehouse, from receiving through shipping. We have now added Voice Directed to our system

Because workers don’t have to juggle a scanner, paper or pencil as they accurately pick, their hands and eyes are free. As a result, picking efficiencies are improved greatly. By using a voice directed system and replacing error ridden, labor-intensive systems, you can experience increased productivity, accuracy and job satisfaction which lowers turnover rate and improved worker safety.

With voice-driven technology in the warehouse, workers wear a headset and a mobile wireless computer attached to their belt. Software converts the picking instructions from the WMS (Warehouse Management System) into voice commands.

Using voice-directed systems a warehouse workers wear their headsets and follow verbal instructions transmitted to them from the HAL WMS application. They are directed as to what, where and how many items to pick or move.

With a voice workers receive instructions, such as “Go to zone A” or “shelf 1, bin1”, and then to “pick item number ‘115112’ a blue widget”. All of this is received by the worker through the headset. Once the worker arrives at the location, he confirms the location with a scan by using the ring scanner. The item number is then scanned for correctness. Next the location into which the item is placed is directed; such as a cart, pallet, location, etc.

The worker confirms that the task has been completed when the ‘put’ command has been executed. The information is continuously transmitted to the host systems to keep the HAL WMS accurate in real time. At this point the next command is given and the process begins again.

The voice directed solutions are typically an alternative or used in conjunction with other technologies such as RFID and handheld scanning.

The advantage that ‘Voice directed’, when combined with a scanning systems, have over voice recognition systems is speed and accuracy. Voice works well for directing work but is much less reliable when retrieving information from the operator.

Training employees on a voice directed system typically takes no more than 20 minutes. Workers who have used another picking technology usually are back to full speed with a voice system after just a few minutes and then continue to improve. “The ramp-up time is extremely fast,” one user says.

In addition to helping boost productivity and accuracy in picking applications — often significantly — voice-directed warehouse applications can improve safety in the warehouse, some industry analysts say. Workers are able to monitor their environment as they walk or drive around the warehouse rather than focusing on the equipment they’re using.

Voice-driven systems are scalable and easy to implement and have been shown to boost accuracy and productivity. In addition there is the “WOW” factor when others look at this technology. This can give a company an edge when potential clients are deciding which provider to select.

Voice Directed Picking is the most important technology change in the warehouse since the development of barcoding. It has a clear, demonstrable payback and industry experts say that seeing a return on investment in less than a year isn’t uncommon 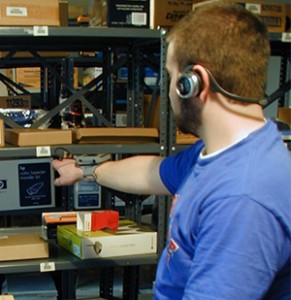 • Hands-Free — Keep both hands free to handle packages or operate machinery and still scan bar codes. Save time by eliminating the need to stop and pick up or put down the hand held scanner in between every package handled.

• Ergonomic — Reduce physical strain and chance of injury by scanning with natural hand motions. It’s light weight and it’s as easy as pointing your finger!

Listening to what the voice technology is telling you:

In companies that use paper/pencil and hand-held scanning devices employee attention is frequently being distracted and productivity drops. Voice is a hands-free/eyes-free operation forcing attention to be placed to getting the job done and not being diverted by other conversations and unproductive eye and hand motions.

Labor Cost: You can expect a 30 to 50 percent increase in productivity and this relates to the labor savings over the life of the system. Language, turnover, seasonal employees and the cost of training need to be considered when evaluating labor costs. Considering language barriers being broken, worker satisfaction increasing and training times being drastically reduced. The Voice Directed solution becomes the most positive and strategic decision that you can make regarding warehouse operations, inventory, labor and customer satisfaction.

Safety: Workers are focused on where they are going while walking or driving.

If you are looking for assistance to improve you operation then lets talk, call 770-927-0700 and tell us about your needs.